Phoenix Environment Group is sorting problematic C&D waste from all over Melbourne into saleable streams, with the assistance of Finlay Screening, Crushing and Recycling Systems.

Phoenix Environment Group, a recycling company based in Melbourne’s northern suburbs, receives waste from all over the city and deals primarily in C&D. Phoenix operates largely as a sorting facility, separating C&D into seven different streams before sending it to alternate facilities for remanufacturing.

Company Director Ash Walker says given the nature of C&D, the material Phoenix receives is often quite contaminated, with multiple mixed materials needing to be screened and separated simultaneously.

“We needed a recycling screen capable of separating heavy weight material from recyclable waste before we send it to separate picking stations for further separation,” Ash says.

“Our previous screen worked well. However, as the company grew and began to work with larger, more commercial clients, we required a new recycling screen to keep up with processing demands.”

The TRS 500 recycling screen is a versatile mobile screen that operates with a specialist screen box designed by German manufacturer Spaleck.

Ash says he spent a number of months researching recycling screens online before coming across the TRS 500.

After contacting Finlay about the machine, Ash was flown to Queensland to view the screen in operation.

“Once I had watched the TRS 500 in action at Finlay’s facility in Burpengary, I became confident in its ability to fulfil Phoenix’s business requirements,” Ash says.

“The Terex machine is much bigger than our previous screen, so we are able to put significantly more material through each hour – it ticked all the boxes for me.”

Phoenix has been using the TRS 500 for just under 12 months, and Ash says it hasn’t missed a beat.

“We use the screen to reclaim a lot of mixed soil and it works 100 per cent of the time,” Ash says.

“Every inch of soil is screened and cleaned effectively and quickly, which means we can remove all the contaminants at a cheap price.” 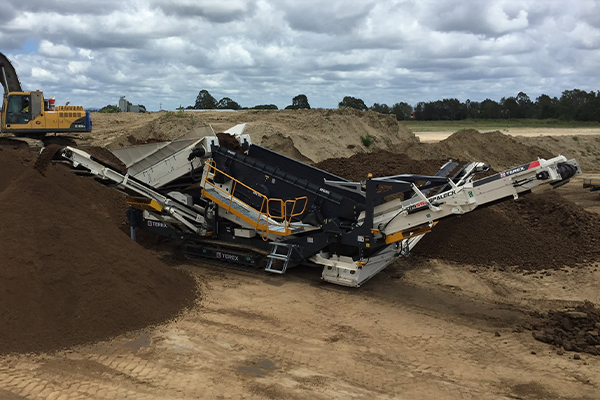 According to Ash, the machine was specifically designed for difficult applications, with the combination of a three-way split system and Spaleck 3D Combi screen box allowing operators to process material previously classed as problematic.

Phoenix uses the TRS 500 to process a minimum of 2000 tonnes of C&D waste at its Coolaroo recycling centre each month.

“Most of our material comes from Campbellfield Bins, Ben’s Bins Hire, Cleanaway and a handful of smaller waste removal companies,” Ash says.

Spaleck screen boxes are designed for efficient screening of wet inhomogeneous material, with separation cuts between 0.2 and 50 millimetres.

The TRS 500 incorporates the Spaleck screen box into a standard Terex platform and frame, with features including a steel apron feeder for feeding heavy bulk material, a 3D top deck screening panel and an aggressive flip-flow bottom deck.

The base frame is agitated by a shaft and unbalanced motor drive, with the vibration passed to the frame via thrust rubbers.

Ash says the tracked heavy duty screen can be operated in a wide range of primary and secondary screening applications.

“The 3D flip flow bottom deck mats can handle high-moisture material, even when screening as small as two millimetres without blinding,” Ash says.

“This ability is critical given the nature of the material we’re processing, as it reduces downtime and maximises our production capabilities.”

“The screwless mounted screening mats create less contamination than regular mats and the high acceleration has a self-cleaning effect,” he says.

Ash says Finlay has a services and parts division in Melbourne, meaning it is just around the corner when the machine needs servicing.

“They respond straight away when I make a booking and are always on call. I’ve been really happy with the service,” Ash says.